One thing is for certain, getting here was worth the dive, but next time, we fly!

The boat over to Saba, just a seventy minute boat ride off the coast of St Maarten, was fast and furious, leading to more than one pale or green face, and a lot of blank stares out towards the horizon. Arrival into the island was by way of a little port, with a small road leading straight uphill to the town of "The Bottom." The three local dive operators have storefronts alongside the power plant and two restaurants that occupy the port. Selecting Saba Deep as my dive operator was very scientific: it was the only one of the three that our hotel booking agent had heard of.

The shop was small, but friendly, and as for the staff, they were great. Suggestions to pre-order lunch with the restaurant above the shop, so that we could still get to eat, and make the return trip on time, were well received by the divers. After mentioning that I hadn't eaten yet, and that the only thing the restaurant offered that I could take with me was potato salad, they directed me to an item on the menu that could be made in less than the ten minutes it would take before the boat was taking off. This type of common kindness and courtesy has lacked on some previous charters I've taken, and it was nice to see.

The captain and divemaster had already taken our gear down to the boat and gotten all of the rigs set up on tanks by the time we got down and set out for the south-west coast of the island. 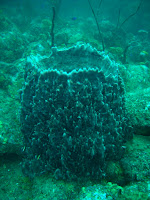 It took a while to find a dive site that wasn't too choppy to dive, or too deep to give us much time. The first dive was at Ladder Labyrinth, an area around the site where the original Saba settlers had to hike goods up before the port and road were built. The site had fingers of lava extending from the mountain, covered in coral and offering the area life. The first thing to strike me here was a new type of coral that I hadn't seen in my recollection. While tube coral I'm used to seeing, this larger tube (whose name I don't know yet), was amazing in its texture and size.

The second thing to amaze me was my first encounter with a seahorse. The little guy wasn't moving much, or at all, but I've met divers with hundreds of dives under their belts who've never seen one. The divemaster said that one had been hanging around this site, and that she'd set off trying to find it once we got down. After she didn't find it, I had lost hope, but on our return after our time was up, she flagged us all down, and we got to see it hanging out on a rock right below our boat. 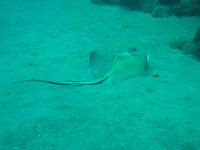 Our second dive was a drift through a lot of varying reef types, from crevices between large rocks, to boulders and lava fingers. We started the dive with a shark swimming off (which I didn't get to see), and a ray on the sea floor. The drift took us through a lot of varying sea life, with an abundance of nudibranchs, small schooling fish and larger ocean fish (one barracuda that I got a photo of its tail end departing). Box fish, butterflies, and other species that I typically associate with warm tropics were in abundance, 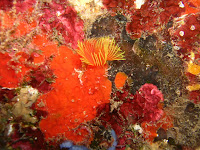 and while the life was plentiful, and much more like what I expect in warm water diving, this dive was not much different than many others that I've been on; which is to say, I loved it, and would go back in an instant.

After heading back to shore, the operators dismantled and cleaned our gear, while we all enjoyed the lunch we'd pre-ordered. On our way back out to the return boat to St Maarten, I watched other divers cleaning their own gear and doing their own work. I guess my random choice was a good one, since the sites were great, the divemasters great too, and the shop was the most customer-service friendly of the three.
Posted by Rob Allshouse at 5:08 PM