A 5.7 million gallon tank, sharks, rays, turtles, and more. This dive was like the petting zoo of diving, where semi-domesticated fish hang out inches from your face, and tiger sharks will swim over your head. It's a pretty amazing experience, and while artificial, is one of the best diving experiences I've had.

The dive started with a backstage tour of the aquarium, including information as to their role in conservation with other aquariums, their animals, the layout of the tank, and some information as to what to expect on the dive. We couldn't take any pictures backstage, so there's not much to share visually, but it was interesting to see how they take care of the tanks and fish.

After the tour (about ninety minutes worth), we made our way into the gear that they supplied (you can't use anything but your own mask), and went down into the tank. The dive started with a ten minute tour around the tank, followed by about a half hour of free time.

One item they told us about prior to the dive was that the interaction with spectators into the aquarium needed to be as if we were cast members, because most of the public doesn't know that we're not. And they weren't kidding. One of my favorite things in the dive was swimming along the windows, waving at and interacting with the kids. It felt like I was adding to the experience of hundreds of kids, and that was great.

Beyond that, like I said, it was like being at a fish petting zoo. At one point, I sat on the ground, and three separate sharks swam within a foot of me at the same time. It was quite intimidating, but awesome. 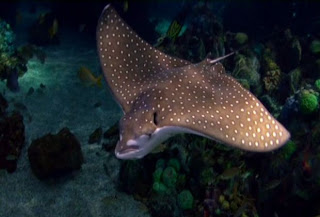 The eagle rays, the sharks, the closeups with the turtles, and more. It was amazing being so up close and personal with so many fish.

There isn't much else to say, but I definitely would recommend the dive to any diver out there, no question.
Posted by Unknown at 8:00 PM

Thank you for this review, it's a birthday surprise for my husband. living in south Chicago he doesn't get out to dive often. THIS I am hoping is as awesome as you make it sound.
JCat